The Growing Up Everett Media Page 3 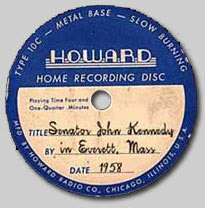 Massachusetts Senator, John F. Kennedy once addressed a crowd in front of the Parlin Library in Everett. I would have cherished the moment dearly had I witnessed it.

Regretfully - I did not.

By editing JFK's original inaugural address - I have manipulated his actual voice to recite our beloved "We're From Everett" chant. 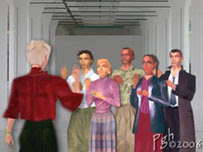 The Everett Oath of Allegiance

One day at Glendale Park, a Malden kid asked us, "What is it with you kids from Everett? Are you all sworn to some kind of secret oath of allegiance to your city or something?" We joked about that for years. Using computer voice technology, I created a recording of a group of people taking the Oath of Allegiance to Everett. You'll get a kick out of this.

"The Everett Oath of Allegiance" 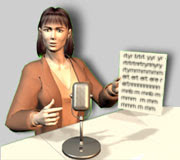 Listen to news anchor , Ben Dover introduce our reporter on the street, Eileen Ovah, as she gives a special news report on the "We're From Everett" phenomenon that's sweeping the nation. You're gonna love this. Trust me. 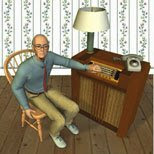 The "WFE" Radio Network Presents
the Virtual Radio Players in
"THE EVERETT VACATION"
That's right, folks. We're bringing back the "Old Time Radio" days with plays that look at the lighter side of growing up in Everett. ... And this is our very first episode. So kick off those shoes, lean back in that comfy chair, and get a load of the most entertaining five minutes you'll ever spend in your life. We're not talking any second rate production here. You're in for the treat of your lifetime. 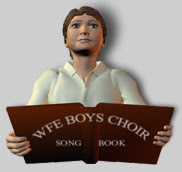 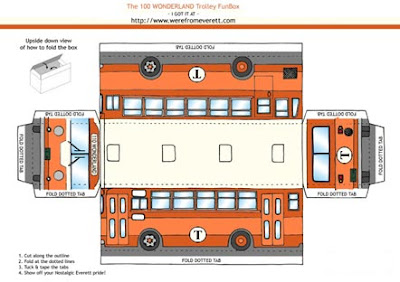 The 110 Wonderland Trolley
Origami Project
Click your Right Mouse Button on the underlined link below and choose Save Target As to download the "ebus.zip" file.

Here's The Ebus File
Print out the image file on your printer. Cut out and fold along the guidelines. Then tape or glue the tabs together.

Now you've got the cutest little paper 110 Wonderland Trolley to proudly display to the envy of all your friends. And if that ain't worth its weight in gold I don't know what is. And tell your friends you got it FREE at "http://growingupeverett.blogspot.com/" where all the cool people hang out.

The kids featured in our "We're from Everett" blog illustrations are 3D models than can be animated. In this short two and a half minute 3D cartoon I briefly demonstrate only a fraction of their seemingly endless possibilities. These animations are rather small and low in resolution to keep the file size optimized for faster downloading.

To enjoy this 3D animated feature, just click your "right" mouse button on the underlined title below and choose "Save Target As" to download it to your computer. After that you just "click" on it with your "left" mouse button and it will play.

Meet Victor (if you haven't already)

Victor is a Microsoft Scripting Agent. These agents come built in as tour guides for software applications. You know, like that stupid talking paper clip that pops up in Window's Word that wants to tell you how to address a letter.

Victor usually comes with Hewlett Packard computers as a tour guide to their operating systems. They're called "scripting agents" because you can rewrite their "script" to make them do what you want them to do. So that's what I did. I recoded Victor's script to re-animated him to make yet another "We're from Everett" cartoon.

To enjoy this 3D Everett animation featuring Victor, just click your "right" mouse button on the underlined title below and choose "Save Target As" to download it to your computer. After that you just "click" on it with your "left" mouse button and it will play.

Take a trip back on the Everett Time Machine to Kresge's snack bar in Everett Square. Let's drop another quarter in that tabletop jukebox at Vargis Diner.

We'll yell our fool heads off at yet another Saturday Matinee at the Park Theatre. And then we'll all head down to Glendale Park for another free Hoodsie on the Fourth of July.

From every neighborhood, and from every generation, we all got back together again to relive the best years of our lives. This is our story. This is our life . . .

My Other Web Sites